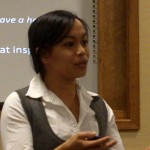 Putting action to its words, the SDACC Board of Directors invited a young adult representative to its recent year-end meetings to speak of the needs of that demographic of the church membership. Faith Calaminos, a 20-year-old CUC student, sat with the Board as a full participant but also took the floor to give a half-hour presentation during which she spoke frankly about the things the church needs to do if it is serious about relating to its young people.

In preparation for her presentation, Calaminos dialogued with her peers face-to-face at CUC but also used social media to engage other young adults not at her location. “I don’t think there was a single one of my peers I talked to…that was not excited about someone their age being in these meetings,” Calaminos said. And their desire to engage was reflected in the quality of responses they gave to Calaminos’ two main questions: What can the church do more and less of to retain its young people?

First among the things that young adults thought the Church in Canada needed was to be more relevant, which, according to Calaminos did not mean merely changing music styles. (“Although we appreciate that. We really do.”) Young adults clearly meant that they want any church they are a part of to be relevant to the community, to have a purpose. An unnamed young adult interviewed by Calaminos commented, “I think our churches should be places in communities where people feel comfortable walking in when they have a need. Our churches should be just as good as welfare.”

More acceptance of new ideas and new ways of thinking was another response often given to Calaminos by her peers. Exuberantly, Calaminos reminded the Board members, “We can sometimes be the most creative people you know!” In a church too-often suspicious of ideas simply because they are new, this plea for acceptance was not new in itself. Calaminos noted, however, that hers is “a conversation generation” and tools like Twitter and Facebook have them discussing ideas in ways and at rates never seen before.

The need was expressed for more young people in church leadership, but Calaminos put the Board on notice that young adults are wise to the all too common practice of putting them into roles that are “safe.” Said one interviewee,”Don’t make me an usher or a children’s storyteller if I have a heart for homeless people or reaching out to the youth.” Of course, this presents an obvious challenge: How are churches to know the ministry paths of most interest to their young people?

“Ask us!” she says. “Take time to find out what drives us. We always hear that young people are the church, so please let us BE the church. Take a chance on us.”

Young adults felt the need for more inspirational young leaders in Canada. Mentioning names of well-known Christian leaders like Rob Bell and Louie Giglio and Adventist leaders in the United States such as David Asscherick, Calaminos noted a complete lack of fresh and enthusiastic youth in leadership in Canada. She urged the board to do what it could to retain “intelligent and talented” young adults in a variety of ways including, but not limited to involving young professionals, those who have graduated from college and universities, who often slip off to the United States or slip out of the church entirely.

Calaminos spoke to the board about a need to support and encourage organizations such as ACTS for Christ, ECYC, and others.
Rounding out the list of what the Church in Canada needs “more” of were two other very important points. Young adults asked for “more prayer” and “more representation” on committees and boards, and more “communication” between the establishment and young adults.”

As one might imagine there were things that young adults felt we should have “less” of, as well. For instance, young adults felt the Church in Canada should do less catering and more challenging. As Calaminos put it, “Don’t worry what you can do for us. Challenge us to make the changes ourselves.” She candidly recounted to the Board a moment during her roundtable discussions at CUC when she and her peers looked at each other and realized, “I guess most of these things are up to us!” Of course, with older folks still holding purse strings and decision-making authority, the traditional must enable those whom they challenge.

Young adults, through Calaminos, expressed their wish that the Church would put less of an emphasis on small things that are insignificant to one’s walk with God. One put it this way: “Less talking the music issue to death—and other small things, too. We know that sometimes they need to be dealt with, but the truth is that when Christ takes hold of a life, even a young person’s, the things of earth will grow strangely dim.”

Final requests for the “less” list were less judgment, less abiding by double standards and less focus on lifestyle issues and appearances.Calaminos presented a thoughtful and candid review of the young adults’ perspective, but could not say why she had been chosen to act as such a representative. “I’ve done some work, I suppose,” she says humbly. “I worked with Azalea Lehndorff and A Better World on the 100 classrooms in Afghanistan project, for instance. And I have done some things on campus. Perhaps the administration heard my name from there. I am honestly not sure, but I am grateful.”

“I am glad that the issues that are important to young adults are being listened to at last,” Calaminos continued. “There was some attention given to the youth at the General Conference session in Atlanta, and that is good. It is so important. But we haven’t begun the conversation about young adults yet,” she notes.

It is a conversation that is important to the administration of the Church in Canada. President Mark Johnson says, “It is time that we get serious about bringing people in who aren’t in the usual range of folks we think of. We’ve got to reach youth and young adults and people from other cultures.” As a next step, he has planned to participate in round table and town hall meetings with students at CUC. And, although it is still early, Johnson has also hinted that this will be a priority for the SDACC quinquenial session.