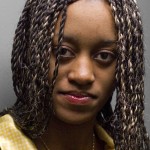 There have been a lot of changes in Liza Imanzi’s life. Coming from Rwanda to Montreal in 2007 with her family was just the beginning. Raised by loving Catholic parents who encouraged Liza’s interest in reaching out to help people, Liza soon found the local hospital and brought her own brand of cheer to patients, chatting and listening to their stories as she had done in Rwanda. Then came her Adventist summer, spent with her Adventist aunt, which ended with Liza attending Greaves Adventist Academy.

“The Adventist teachings are more real and meaningful,” reflects Liza, who began bringing her little sister to church and helping in the children’s divisions. But while Liza liked what she heard, she was not attracted by what she perceived as a gap between teaching and practice. It wasn’t until she attended a series of meetings that Liza realized that she needed to change her focus.

“My parents have always let us go our own way with church,” says Liza. Her parents had always encouraged their children to follow what they believed was right, so when Liza told her mother she wanted to be baptized as an Adventist, she was surprised at the response.

“Do you want to be my child?” Liza’s mother asked. “If you’re baptized, you’re pretty much finished here.”

The choice was clear-cut. Liza knew that if she was to follow her conscience, she would need a supportive, like-minded community as she pursued her college education. Liza was baptized at the CUC church at the February 11, 2011, vespers by Chaplain Paul Antunes.

“I can laugh at myself,” Liza smiles, recalling how she scrutinized others’ actions. “I check myself—to see what I’m becoming. I need to focus on God, not criticize and feel superior.” CUC’s Campus Ministries provides a way for her to keep focused on serving God and others through hospital visitation, which she discovered at Community Service Day, soon upon arriving at CUC. Liza wants to share her enthusiasm and hospital volunteer experience on two continents as a leader in the Sunshine Band ministry this coming year.

There will be a difficult conversation with her mother this summer, and Liza hopes for her parents’ blessing, but the outcome is in God’s hands. “By God’s grace,” Liza says, “I will continue my hobby [of hospital visitation] at CUC. I like to make people happy.”