“Yea, whiles I was speaking in prayer, even the man Gabriel, whom I had seen in the vision at the beginning, being caused to fly swiftly, touched me.” Daniel 9:21 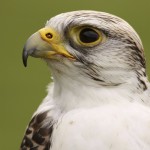 Because of our use of pesticides, peregrine falcons were once in danger of becoming extinct. Their numbers went into sharp decline as pairs of the falcons failed to hatch new chicks. Chemicals in the birds’ food had made their egg shells brittle, causing them to break. It wasn’t until breeding programs were started that peregrine falcons began to make a comeback.

Peregrine falcons are the fastest animals in the world. When they fold their wings and dive, their streamlined bodies slip through the air at speeds of around 320 kilometres per hour (200 miles per hour). Even at such high speed, peregrines are deadly accurate, striking their target with perfect precision.

Unless you’ve been skydiving, it can be difficult to imagine what it would be like to drop down through space at peregrine-speed. Try to imagine, then, what it would be like to travel at angel-speed. Isn’t it comforting to know that God’s messages to us are sent at angel-speed? God delights in comforting His children and can send His messengers on errands of mercy when they are needed most.