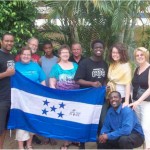 It was Thursday night around 6:30 p.m., and there I was sitting beside my driver, Alalide. I was anxious and excited at the same time to see the place where I would be sharing Jesus night after night for 19 days. The ride was long, and it started to get dark. Finally, the truck slowed down, and we left the paved road and started winding down a one-way mud trail full of holes. The driver kept his eyes on the road and quietly said, “I can’t believe that they send you to preach in Barial [Honduras]. Do you mind preaching in this place, Amélie?” I wasn’t sure what he meant, but as the truck made its way up the mountain, I realized that I would be preaching right in the slums. I had never been in such a poor and rundown area in my life. I turned towards Alalide and said, “This is the place where God placed me. I don’t mind preaching here at all. I’m looking forward to seeing God’s glory shine on the mountain!” 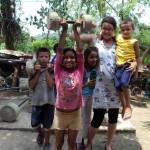 The truck finally stopped at the top of the mountain at the local community centre where I would be preaching. As I stepped out of the truck, I was suddenly surrounded by children curious to meet the white girl from the far away country called Canada. I instantly fell in love with them! From that moment on, the kids and I became inseparable. They would follow me everywhere! They were God’s little angels sent to help me make it through my time there.

At first, not many people came to the meetings. But then one night, the community centre was being used by another group, so I was forced to preach outdoors using speakers to reach the audience. Night after night, more and more people came and we soon ran out of chairs. With so many people in attendance, we decided to continue preaching outside for the rest of the meetings.

As the meeting went on, I realized that not everything was going to run smoothly. Satan was not happy with what was happening, and so he put obstacles in the way. On the evening with the highest attendance, a heavy rain and strong wind started to blow. I stopped preaching and asked everyone to stand up for a special prayer. I prayed out loud from the bottom of my heart and asked God to stop the rain. A few moments after the “Amen,” the rain stopped falling and the wind disappeared, and all around was calm. I almost couldn’t believe what just happened! God’s presence was felt, and it strongly impressed the hearts of those in attendance.

During another meeting, a woman approached me and asked me to come to her house to pray for her dying son. I quickly followed the woman to her home and found her 18-year-old son looking weak, shaking and sweating. I took him in my arms and began praying for healing and for God to be a presence in his life. As I left, I let the young man know that I, as well as many other people, would continue to pray for him. The following night, to my surprise, I saw the young man sitting there in the front row with a big smile on his face. I walked over to him and learned that the doctor was amazed at his recovery. It was, “a real miracle,” the young man said. He was feeling better and had even gone to school that morning. Again I was amazed at what God had done!

As the meetings came to an end, I praised God for the 15 people who decided to give their lives to Him and be baptized. There were also many more who expressed interest in learning more about Jesus, and only God knows all the seeds that were planted in other people’s hearts. I told them that I wished from the bottom of my heart to see them all in heaven one day.

This trip to Honduras was a life-changing experience for me. God’s presence shone not only in the slums but also in my own life. It made me realize that I love a God who is real and that nothing is impossible for Him! All he asked of me was to trust Him fully and let Him take control, and He would do the rest. Only after giving Him control of my life could I truly see His mighty hand at work.

Amélie Doyon is a fourth-year Music major at Canadian University College. She is from Tring-Jonction, Quebec.