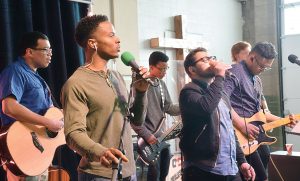 Just before summer 2015, a dozen young adults gathered in a 700-square-foot apartment to talk about their faith. Each recognized a need in their community and a desire to align their passion with Jesus’s calling, and thus a small group was formed.

The core members wanted to develop their leadership potential, so as they dreamed of what church could be, they also planned a road trip to visit a thriving church company in Chicago: Epic Church.

In October 2015, thirteen intrepid travellers experienced miracle after miracle and received inspired instruction about the direction of their next steps. January 2016 saw this same group move their Friday night meetings into a new space, and on February 13, the doors opened on Sabbath to welcome more than 80 people to a new fellowship group in Red Deer.

An immediate emphasis on mentorship brought new preachers to the pulpit and trained worship leaders into their role with an outreach activity scheduled every Saturday following a hospitality-hosted lunch. Small groups began to form right away to explore “The Story,” as Epic became the place where our story meets God’s story.

Volunteers grew in number, a children’s program started up, and ministries began to refine their approach. A guest speaker in February provided a winter evangelistic series combined with community outreach events such as free tickets to the trampoline park, a movie, and a concert. In April 2017, Epic Church Red Deer Company signed their charter and officially launched as a community of worship. Epic’s 56 new members joined through transfer or baptism and immediately sought ways to get involved.

A season of events allowed people to invite their neighbours, friends, and family canoeing, picnicking, backpacking, and biking. New small groups formed to tackle a third and fourth book together. Families grew, friends moved away, and Epic organized a visioning session with the core group. This same group then attended Breakforth Leadership Training Conference to gain more ideas for tangible ministry.

In February 2018, on the weekend exactly two years from launch, the Epic community celebrated with a retreat to Foothills Camp. A new vision was cast as ministry leaders recommitted to serving. Epic went on to ordain its first elders and continues to actively engage young leaders.

The Alberta conference president, Gary Hodder, delivered a message of acceptance and invitation to participate in God’s work. Pastor Wayne Williams charged the new church nucleus to hold themselves to a high standard in serving the Epic community, and Pastor Olaf Clausen shared, along with Dr. Johan Kritzinger, how the Red Deer Seventh-day Adventist Church will continue to stand side by side with Epic. The day was filled with testimonies of how Epic has changed hearts and shaped decisions for Jesus, celebrating the start of a new church sharing an old but important message in an inclusive, relational way.