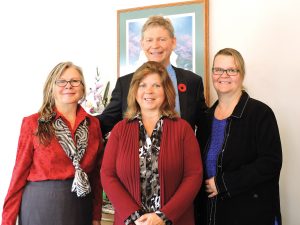 Evelyn and Brenda were born into an Adventist home, but because of family breakups, they eventually broke with the church too.

Trying various Sunday-keeping churches, Evelyn felt uncomfortable because the day just didn’t seem right. When her atheist husband put her down for her beliefs, she quit attending any type of church, but she didn’t stop praying. “I prayed all the time,” she says, “especially when I was all alone, as on mountain tops.”

Her mother also prayed, and introduced her to the Doug Batchelor videos. The one on the Sabbath struck a chord. When she moved to Penticton, B.C., two and a half years ago, Evelyn looked up the Seventh-day Adventist church.

Meanwhile, Brenda, Evelyn’s half-sister who had rejected a Christian lifestyle altogether, was in a serious accident. Their mother was visiting Evelyn at the time but cut her visit short so she could be with her other daughter. She realized that Brenda was injured more severely than at first suspected and took her back to the doctor, who found soft-tissue damage in the spinal cord that was causing paralysis. Through good care, prayer, and a change in lifestyle, healing came.

Penticton has an active prayer ministry, and Evelyn has been part of it for some time already. “If someone asks for prayer, I give it, with all my heart,” she says, “because I know how important it is.”