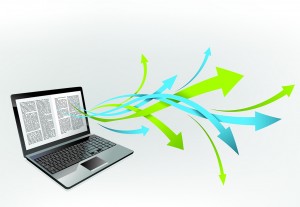 Throughout history, the communication of information has always been very important. An online source states, “The history of communication is mankind’s search for ways to improve upon shouting.”[1] Understandably, the lack of communication has often caused loss of money and lives.

“People crave news out of basic instinct.” “Knowledge of the unknown gives them security; it allows them to plan and negotiate their lives.”[2]

Communication technology has come a long way since Morse sent the first telegraph in 1844 from Washington, D.C., to Baltimore, a distance of 40 miles—a message that said, “What hath God wrought.”

With so many communication technology inventions in our past, I want to mention just a few. We have seen the invention of the telephone in 1876, the beginning of radio communication in 1896, the introduction of the television with moving pictures and sound in 1936, the internet which was launched and made available to everyone in 1983, satellites, cell phones, text messaging, email, and more recently, in 2006, the launch of a social media application called Twitter.

According to the online encyclopedia Wikipedia, Twitter has been called the “SMS of the internet” (SMS means “text messaging”).  Since its creation and launch in 2006, Twitter has gained popularity with approximately 100 million users worldwide.

The communication technology of Twitter “enables its users to send and read other users’ messages, called tweets.” In short, Twitter allows information up to 140 characters to be instantly sent and then received by other users (followers), making the knowledge of current news available by the second.

I was very interested to know if and how Twitter was used during the 59th General Conference Session held in June of this year. I made a few inquiries and was put in connection with Megan Brauner, Media Relations assistant for the General Conference.

In my conversation with Megan, she told me that the General Conference communication department used two Twitter accounts during this year’s session, @AdventistNews (currently with approximately 2,000 followers) and @gcsession.

Regarding the @gcsession account, Megan said, “I spent more than half of my time answering questions on Twitter. People didn’t want to know just the dry facts. They wanted to know what it was like to be there, or what I was seeing and experiencing.”

She continued to say, “A lot of my followers came to Atlanta for only one or two days or weren’t able to come at all, so they appreciated knowing behind-the-scenes details and getting the inside scoop.”

The use of Twitter during the 11 days of the GC session provided approximately 2,500 hits to the news.adventist.org website as people clicked on Twitter links to the full story on the news website. “It was important to be as timely as possible.” Megan said, “I tried to tweet elections the minute they happened, not hours or days later.”

Megan tells me that the comments from the Twitter followers were very positive, expressing appreciation of the news and information shared with them. Several people were from isolated areas of the world, and the use of Twitter was for them the best way to keep informed of the latest GC news.

Megan said she enjoyed using this new communication technology because “it’s very rewarding to feel like you’re truly part of a global community. . . . It felt good to do my bit,” she said, “a process many Adventists may never get to experience.”

—Troy McQueen is the communication specialist for the British Columbia conference of the Seventh-day Adventist Church. He also pastors the Kelowna church in Kelowna, B.C.

[2] Bill Kovach and Tom Rosenstiel, The Elements of Journalism: What Newspeople Should Know and the Public Should Expect (New York: Three Rivers Press, 2001), 15.