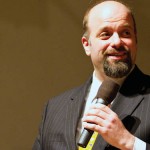 CUC’s chaplain, Paul Antunes, knows what it means to come a long way. As a young boy, he emigrated with his family from Portugal and witnessed his father’s struggle with language and search for Bible truths. His father’s reading of the Bible—four times through—and Henry Feyerabend’s witness on It is Written drew Paul’s family out of whatever familiar comforts their Catholic Portuguese community in Richmond, B.C., afforded them and into the Abbotsford SDA church.

Like many immigrant children, Paul was quick to embrace things he believed would help him fit in. Being a gifted musician, the gregarious, energetic 11-year-old became an ardent devotee of rock and roll—until he heard Steve Green’s “God and God Alone” on his walkman at age 14. That’s when the really exciting journey began. At Mountain View Summer Camp in Hope, B.C., as a 17-year-old counselor, Paul turned his life over to God and decided to become a youth pastor.

At his parents’ urging, Paul agreed to attend the Adventist college in Brazil for one semester to re-learn Portuguese, vowing that he would stay no longer and would never date a Brazilian. Five and a half years, two Christian music CDs in Portuguese (19,000+ sold) and hundreds of concerts later, Paul returned to Canada with his Brazilian bride, Raquel. He joined the Canadian It Is Written team and later served as a pastor before the chaplaincy door at CUC unexpectedly opened.

Paul often refers to John 15 and Jeremiah 29:12–14 as he encourages students like Liza Imanzi to make God the centre of their lives. “The only way we can find out true purpose in life,” he says, “is to seek the Lord with all our hearts.

“When you take that leap of faith,” Paul explains, reflecting on his own journey, “that’s when God throws open the windows.”

To hear one of Paul’s recorded songs in English or Portuguese, and for more on Campus Ministries opportunities from student directors, visit www.cauc.ca.