100 Years: A Little Church With A Big Impact

2017 marked this the 100th anniversary of the Swan River Seventh-day Adventist Church, and the commemorative event reflected the life of the church in several ways.

Sabbath afternoon involved an outdoor service on the land near where the original church building had been built in in the country near Minitonas, Man., in 1917. The small gathering mirrored the ongoing house churches and small-group Bible studies that had planted and kept the Adventist message alive for a century.

Connected to Their Community

Throughout the Swan River church’s history, there has been strong community connections. The local MLA, Swan River mayor, and several pastors from other local churches were part of the weekend ceremonies.

During Nick Trynchuk’s time as pastor (1957–63), the church started hosting Harvest Festivals. The Thanksgiving dinner and a service afterwards was well attended and brought new members. When the Swan River church burned to the ground in 1972, both the local Anglican church and a funeral home immediately offered their buildings for Sabbath services to the congregation.

Retired former pastor Roy Jamieson was president of the Swan River Ministerial Association during his first tenure from 1972 to 1977 and, before he left the district, was asked to preach about Adventist beliefs at the local United church. This interfaith work taught Jamieson that “we can mix with others without being critical of their faith, invite them to our services, and build bridges.”

Making a Difference Locally and Globally

The Adventist Church’s worldwide influence was represented by guest speaker General Conference Associate Ministerial Secretary, Anthony Kent. During the evening services, Roy Jamieson spoke on “Men Who Made a Difference” both locally and on a broader scale. For instance, T. E. Unrau, Swan River’s first pastor in the 1920s, profoundly influenced how the Adventist faith would be viewed later in his ministry. In the 1950s, through a friendship with influential Presbyterian minister Donald Barnhouse, he helped correct the view that the Adventist faith was all law and no grace. Barnhouse, in turn, influenced author Walter Martin to contact the General Conference during his writing of Kingdom of the Cults. As a result, Martin’s influential book defended Adventism’s Christian orthodoxy, helping to change the thinking of many evangelicals in the 1960s who had labelled Adventism a cult.

The Swan River church continued its connections to the community recently with both a five-night prophecy DVD and discussion series at the local public library and a separate four-night vegetarian cooking school led by local church members and Glenda Nischuk, the director Man-Sask Health Ministries. Both endeavors planted seeds, created new relationships, and resulted in future Bible study interests.

A century of outreach happens one day at a time. Let’s pray Jesus’ work expands daily in Swan River and across the Man-Sask Conference. 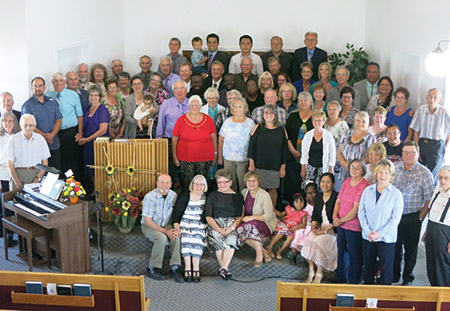