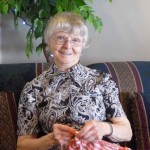 On Sabbaths, Alma Sparling is conspicuously absent from the lobby of the retirement facility where she lives. Any other day, she sits there knitting and chatting to visitors, residents and staff who pass by, but on Sabbaths she is at the Penticton Seventh-day Adventist Church.

In the last few years, Alma, who is well into her 80s, has knitted more than 800 children’s sweaters. Some are sent to ADRA (Adventist Development and Relief Agency) and warehoused until needed, while others are taken overseas by local missionaries, where they are proudly worn by Luo, Peruvian, Ovamban and Jamaican children.

The most recent recipients of Alma’s handiwork were Angolan refugees in Sauyemwa, Namibia, site of a ShareHim series. Most of the refugees live in shelters made of sticks pushed into the sand and held together by strips cut from inner tubes. Mud daubed on to fill the largest cracks and grass for the roof complete the dwellings, which have no furniture.

In addition to about 60 sweaters, Alma sent several knitted caps for newborns. Even the suitcase that contained the sweaters was given away to the oldest man in the settlement. He beamed as if he had won the lottery.

Alma, who suffers from arthritis, says she loves knitting as the exercise keeps her hands mobile. In addition, seeing her sweaters distributed to those who have practically nothing gives her the incentive to knit more.