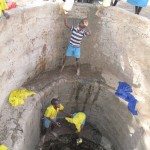 For more photos related to this story, click here.

Last week the United Nations appealed to the international community for emergency aid as East Africa faces severe drought and famine putting about 10 million people at risk of starvation.

While in Kenya earlier this year, Lacombe-based charity A Better World (ABW) was forewarned about the situation by the Kenyan drought management agency and took action.

“They were predicting a drought,” said Eric Rajah, ABW co-founder.

Frustrated with the high cost of commercial water drilling, ABW bought their own rig to drill wells. It cost $214,000 and ABW funded $100,000 of it and partnered with Kenyan Charles Rioba.

So far Britain has pledged $61 million to help 1.3 million people in the Horn of Africa and Green Party leader Elizabeth May is calling for Canada to help the drought-stricken area.

“We are drilling water wells about 300 km from Dadaab,” said Rajah. “Our goal is to get 10 wells done this year.”

Kenya, Ethiopia and Somalia have been affected the most by the drought, which is causing a famine. Tens of thousands of refugees from Somalia are pouring into Dadaab, Kenya.

“What we are seeing is a pre-cursor of devastating famine,” May said in a statement. “We must act now to do what we can to help these people.”