Eric Rajah, co-founder of the Lacombe-based humanitarian organization A Better World, has been chosen from almost 2,000 nominees, as one of the top 50 in the CBC Canada’s Champions of Change.

Twenty years ago, Eric and his wife, Candi, decided that they would do one humanitarian project per year. Eric, who himself grew up in poverty in Sri Lanka, had long before determined that, if he was able to attain a reasonable life for himself and his family, contributing to the good of others in developing countries would be a very high priority. The increasing success of the business he’d recently launched allowed him that opportunity.  He proposed an idea at the College Heights Seventh Day Adventist Church in Lacombe: one week each year, funds would be gathered for the yearly project. The members of the church responded, giving $12,000 within the first week, and a partnership was formed that has lasted to this day. Now, A Better World also partners with many community businesses, schools,  churches, other organizations and individuals to help the needy in more than 15 countries around the world.

Eric has taken more than 1500 travelers to see for themselves the difference that can made when ordinary Canadians decide to make a better world. Thousands of lives have been changed as a result of this opportunity that he has created. 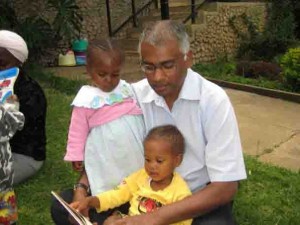 Currently, Eric is in Kenya with a group of 44 volunteers but learned of the CBC’s recognition of him by telephone. In response Eric says, “I hope this will bring honour to the thousands of volunteers who give of their time so generously, donors who unselfishly share their financial resources and recognize our small community of Lacombe in Central Alberta where it began. I am honored and humbled by the nomination.”