The Adventist University of the Philippines (AUP) has humble beginnings in educating and preparing missions-oriented people to become efficient workers in all the various branches of Christian service and ultimately to prepare for citizenship in the kingdom of God. This institution just celebrated its 100th year in 2017. The AUP song “Shine on Forever, Dear AUP” says it all. Its alumni can be found all over the world, including here in Western North America.

Alumni of Western North America (AWESNA) has played an important role in making sure AUP continues to fulfill its mission statement, which is to provide quality Bible-based education and nurture students for academic excellence, Christlike character, and exemplary service.

Year after year, AWESNA rallies its membership through an annual convention hosted by the 13 different chapters. This year, the convention will be the 46th, and it will be hosted by the Alberta chapter, in Edmonton. This chapter joined AWESNA in 2009. Between 2006 and 2011, Alberta received the most immigrants from the Philippines. This included alumni from AUP.

Ken Denslow is our featured speaker for the 46th annual convention. He is assistant to the president of the North American Division (NAD) of Seventh-day Adventists in Silver Spring, Md. Previously, he served the church’s Illinois Conference as president, a position he held for nine years. Before that, he served as a pastor, ministerial director, and conference secretary in three conferences. He was also associate director of the North American Division Evangelism Institute (NADEI) for several years. His wife, Patricia, is a Grade 7 homeroom teacher at J. N. Andrews Elementary School in Takoma Park, Md. Ken and Pat have two grown children: Michael lives in Chicago, and Kristin lives with her husband and daughter in Gainesville, Fla.

At our 45th annual convention, held in Loma Linda, Calif., the featured speaker was none other than Mark Johnson, president of the Seventh-day Adventist Church in Canada (SDACC). Mark was a student missionary to the Philippines and was a frequent guest speaker of Philippine Union College (now Adventist University of the Philippines). A Filipino by heart, he enjoys Magnolia UBE ice cream/Pinipig Crunch, a favourite treat every time he and Vic Arreola see each other during NAD meetings.

During every annual convention, the president of AUP, Francisco Gayoba, gives his annual report during the AUP Hour. One AWESNA’s major projects is to help fund the College of Medicine building. There are also different projects the various chapters are undertaking on the campus. A challenge will be given to the delegates of the continuing needs of the school to make sure the institution will be a beacon of light to spread the gospel through its alumni. This 46th convention, Gayoba is on Sabbatical leave and will not be able to attend the convention here in Edmonton; Miriam Narbarte, AUP vice-president for academics since 2008, will undertake this important aspect of the convention.

You are considered alumni of PUC/AUP if you have at any time attended elementary, high school, college, or graduate school, parents, members of the faculty and staff. Any financial supporter is also an alumnus. If you wish to attend this convention, please contact River Cree Resort, 1-844-425-2733 and mention our reference # M-AKIRDUP. 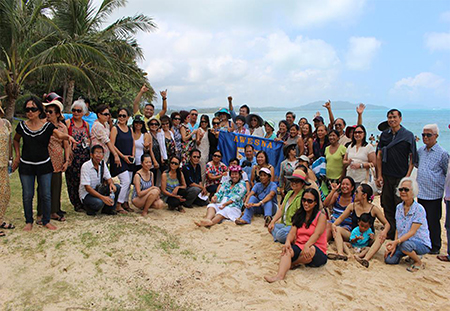