WOW, what an amazing sight to see. There were close to 700 people packed in at Red Willow Community Church for Global Youth Day Weekend 2018. But what made it more interesting was the fact that nearly all of them were young people. It was like an army of God, joined together for one purpose, one goal and one aim, and that was to “Be the Sermon.’

Our speaker for the weekend was the internationally known Wesley Knight, who moved, inspired, and empowered the audience by his riveting messages. Knight, who is a native of Toronto but now lives in Atlanta, knew just how to connect with his audience and deliver the Word of God in a biblical, Christ-centred and relevant way.

One of the messages that he shared from his heart was entitled “Thirsty,” during which he invoked the Bible story of the woman at the well. He shared, “Many of us are thirsty and relying on wells that we will always have to return to, … but if we allow Jesus to work, He can do something in you where you don’t have to keep relying on an external source.” At end of the message, he made a call for people to leave their “buckets” at the altar and stop relying on people and things that only leave us thirstier.

The youth who were involved in Urban Ministry downtown Edmonton were tasked with the ministry of compassion: handing out free water, free food, and free clothing to those who were in need. Sixteen fearless youth, as young as 10 years old, braved the cold weather to show God’s love to those who were residentially unhoused.

One young man named Walter stayed over an hour in the cold and snow—standing up in the back of the Adventist Development and Relief Agency (ADRA) truck handing out clothing until the last person, Tara, was served. He was asked, “Aren’t you cold?”

He responded by saying, “I was cold at first, but it’s actually not that bad. After I started moving in search for clothing items they needed, and handing out clothing, I warmed up a bit.”

Ten-year-old Erica was asked if she was cold and if she wanted to go into the bus to warm up, to which her response was, “No, I want to stay and help the people outside. They need help, so I will help give them clothes. I just need a hat for my head.”

The evening ended with pizza, social night, and a four-on-four basketball tournament. The youth socialized at Red Willow Community Church for the rest of the night and spent time engaged in conversation and fellowship. We thank the Red Willow Community Church for hosting this event and allowing the youth of Alberta Conference to centralize and organize in order to “Be the Sermon.”

Over the weekend it was clear that it was not enough just to preach the sermon, but it was more important to be the sermon; a walking and living testimony of the grace of Jesus Christ for the world to see. It was Edgar A. Guest who penned the words, “I would rather see a sermon than hear one any day.” 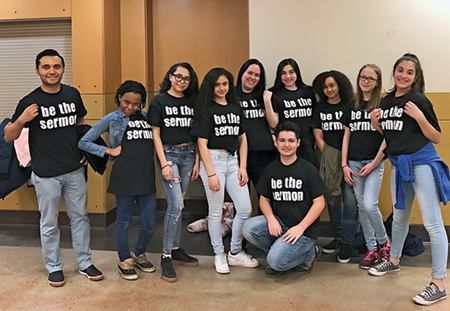