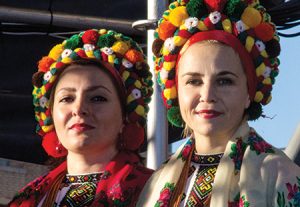 A number of Messenger readers have their roots in Ukraine. Others may only think of that country of over 45 million people when purchasing perogies at the supermarket, but Ukraine has been a high-profile news story for many months now.

A revolution took place in February 2014 after a series of violent events in the capital of Kiev. Unrest continues in the Crimea; there have been protests in some southeastern regions; and armed conflict continues in the east of the country.

As fighting between armed groups and government forces continues, people have been forced to flee their homes and have become increasingly vulnerable. It is reported that over 275,000 have been displaced from their homes and an estimated 341,000 have fled to neighbouring countries. As the fighting is triggering renewed displacement, there is a need to scale up the response to meet the humanitarian needs of the affected people.

At the beginning of October, an announcement on behalf of Minister of International Development Christian Paradis, stated, “Canada will continue to support Ukraine through the current crisis and beyond.”

I made an urgent trip to Kiev at the beginning of October to gather information to bolster our request for emergency funding to respond to the crisis.

A translator tried to help me understand what our Ukrainian family are facing. “Imagine,” he challenged me, “that your country went to war with the United States. Wouldn’t you be confused and hurt? The same is true for us. We Ukrainians have family and friends in Russia. Russians have family and friends here in the Ukraine. So the conflict between our countries is bewildering!”

For the full story, look for the February issue of the Canadian Adventist Messenger.