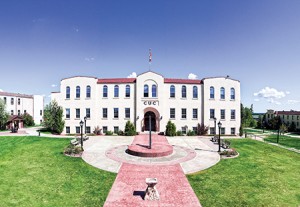 On Dec. 15, 2014, the CUC Board of Trustees approved changing the institution’s name from Canadian University College to Burman University.

The university is named after Charles A. and Leona Burman, the husband-and-wife team who founded the institution in 1907. Charles A. Burman served as the first and third president (principal) of the school that would be known as CUC. Leona Burman taught English, science, language, geography, physiology, and acted as school nurse. Both Charles and Leona devoted their entire lives to the work of the Seventh-day Adventist Church.

“It was because of their selfless dedication and sacrifice that the first school on this hilltop was established,” said CUC President Mark Haynal. “In every season of their ministry, both of these individuals exemplified the mission of our school. They thought with discernment, believed with insight and commitment, and acted with confidence, compassion, and competence.”

On July 2, 2014, the Alberta government granted CUC permission to change the institution’s status and name from “university college” to “university.”

“Referring to ourselves simply as a university will more clearly reflect our degree-granting status and enable our students to pursue graduate school and employment without having to repeatedly explain what a ‘university college’ is,” says Haynal. “Because ‘university college’ means markedly different things in different regions, potential students and administrators of post-secondary institutions across Canada and around the world have always been uncertain and often confused by our name.”

The name change will lessen the confusion for students as they apply to graduate schools or look for employment. “I have no doubt that the name change from ‘university college’ to ‘university’ will help in career searching or pursuing post-graduate education. In Canada, especially because we have a difference between universities and colleges in regards to the education provided, applying to jobs, or in my case, medical schools, is difficult and confusing because potential schools see the ‘college’ on my degree. I am thankful for the change in our school’s name, and I know that it will continue to benefit graduates in the future by making their lives after university less difficult,” stated Joshua Perkins, a third-year biology major.

Theresa Donkor, a third-year business major sees the name change as a positive as she plans for future employment. “Changing the name is especially important for graduating students. Becoming a “university” instead of a “university college” will clear up any confusion that other businesses or universities may have. I’ve often been asked, “How can your school be both a university and a college?” This confusion may hinder us students when faced with future job opportunities or the chance to pursue further education,” states Theresa.

The name Burman University was chosen after an intensive process of focus groups held in three regions of Canada. Faculty, staff, students, alumni, friends, and citizens of Lacombe joined the process, suggesting more than a hundred possible names.

CUC will continue as Canadian University College for the remainder of the 2014/2015 academic calendar year. Full implementation of the new name will take place May 1, 2015. The name change process will be fully complete after petition for amendments through a private bill moves through the Alberta legislature.

Founded in 1907, the university has operated under six names in the past 100 years. The most recent change from Canadian Union College to Canadian University College took place on Feb. 23, 1997. The name change was deemed necessary to reflect the degree-granting status given to the school.