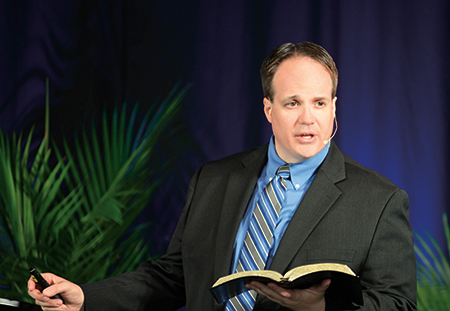 “There will be no more tears in heaven,” reminded Pastor Chris Holland, speaker/director of the It Is Written Canada television ministry, to his audience at the Nepean Sportsplex Auditorium in the closing message of the Discover Hope evangelistic series in Ottawa on Saturday, May 30.

Implied in Holland’s statement is the fact that until we get to heaven, tears will be the bread and butter of our human experience. But while tears usually denote deep emotion, they are not necessarily a sign of turmoil or distress. Indeed, on closing day there were tears in the candidates’ (and their relatives’) eyes as they surrendered their hearts and sealed their decisions for Jesus in the baptismal pool.

The baptismal ceremony, which took place in the shallow end of the Olympic pool of the Nepean Sportsplex complex, was streamed live from the pool to the audience following it on big screens up in the main auditorium of the venue. Pastors and members in the area hope that the 17 newly baptized converts are nothing but the firstfruits of a more abundant harvest to be reaped after a follow-up plan is implemented and additional outreach activities are introduced by this fall.

The series, which ran from May 22 to 30 at the city venue in western Ottawa, was launched after weeks of intensive geographically targeted advertising through the mail, door-to-door flyer distribution, billboards, bus signs, radio ads, and personally delivered invitations. On the first weekend, members and visitors enjoyed not only the preaching of the Word, which provided a contemporary view on old-time prophecies, but also inspirational music by Winnipeg-based singer and ADRA ambassador Christine Wollmann. This was just a sample of what was to come, as numerous local talents used their musical gifts for inspirational singing and performing.

For the speaker of the series, whose evening messages were simultaneously interpreted into French by volunteer bilingual members, a highlight of the Discover Hope initiative was undoubtedly seeing all the churches in Ottawa and their pastors coming together in unity.

“The churches came together in prayer. The churches came together in work,” said Holland. “The early church experienced explosive growth only in unity, and that kind of unity was experienced in our days together.”
According to Manuel Donoso, pastor of the local Nepean Seventh-day Adventist Church, just a few minutes away from the venue, the best thing that happened was to bring the churches to work together as a team. “This is something I had never seen before in the area,” he said.

The chair of the Steering Committee for the series, Pastor Orlando Pule, agreed. “The meaning of synergy—that the whole being greater than the simple sum of its parts—has been very true in our case,” said Pule. “As a region, we were able to accomplish more together than if we had tried to reach the city on our own.”
Overall, there is a growing sense that this series could be a launching pad for increasing God’s kingdom in eastern Ontario. “Momentum is a great thing,” said Pule. “I believe the folks in the area have responded well to working together as a region, and we have to keep the region engaged and focused on soul winning.”

Pastor Holland also believes that the series could be a defining moment for spreading the message of the gospel in Ottawa.  “If the churches continue on a path of unity and comprehensive evangelism, they will truly succeed in reaching the masses,” said Holland. “God has smiled [during the series], and He is calling upon us to continually lean on Him and see His amazing grace transform Ottawa.”

On the other hand, local church members and pastors are convinced the special week of meetings was never meant to mark a climax in regional evangelism but just a renewed way of approaching mission in the nation’s capital.  “This was not the end; this was just the beginning,” stressed Pastor Joseph Duchesne, secretary of the Eastern Ontario Ministerium, which groups a dozen pastors from the Ottawa Valley to the very border of the province of Quebec. “It is a flame we pastors and members need to take up and definitely carry forward.”

Back in the baptismal pool, tears were once again part of the emotions felt not only by candidates but also by their privileged few relatives and close friends, just a few feet away, who witnessed the new members rise up from the baptismal waters to a new life in Christ.

“This was one of the most powerful and moving experiences of my life,” said Zara Phillips, mother of two of the youngest candidates. “I definitely sensed the presence of the Holy Spirit, and looking at all the faces, it was clear that all candidates were filled with joy.”

Her eldest son, 12-year-old Samuel, seemed to agree. “I felt really happy and proud that I made the right decision,” he said with a broad smile.

“Pastors, make sure your Sabbath services are open to visitors,” said Bibulovic. “As you preach every Sabbath, keep focused on evangelism.”

Additional plans for the next few months in the area include an increased presence in the community, personal invitations to Bible studies, evangelistic reaping miniseries at various churches in the area, and a custom plan catered to meet the needs of two specific group of people—those who have been attending church for some time but so far have never made a decision for Christ, and some members who have been away from church and felt Holland’s messages were a divine invitation to come back to the fold.

The general feeling of the organizers after the series was one of calm confidence that the event was God-led.

“I felt the Holy Spirit present in the meetings,” said Bibulovic. “The unity of the members could easily be sensed. Now it is time to enjoy the present and move on.”

The guest speaker seemed to echo Bibulovic’s assessment. “My prayer and hope is that the unity achieved continues, and Ottawa is won for Jesus,” said Holland.

Marcos Paseggi is the pastor of Ottawa Spanish and Kanata companies.