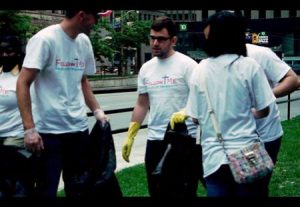 On Sunday, June 17, a group of over 40 individuals, adults and young adults, met outside the Toronto City Hall. They had prayer and then, armed with gloves and garbage bags, silently began to pick up trash off the street. As they worked, pedestrian passing by called out to them “God bless you!”, and some, inspired, stooped to pick up garbage around them as well. Someone from City Hall came out to thank the group for what they were doing.

There was no discussion, no hesitation; everything had been prearranged by text before hand. Only their t-shirts spoke, proclaiming loudly that they were part of the Follow Me Adventist Movement (FM-AM). The group moved through their chosen area for about 45 minutes and then, as quickly and quietly as they had arrived, they collected their garbage bags together, had a closing prayer, and went their separate ways.

Mark Johnson, president of the Seventh-day Adventist Church in Canada, joined the FM-AM flash mob on Sunday afternoon. When asked what impact he thought the event had on the community, he said “It spoke to the need we have to take care of our surroundings… of doing things for others without expecting something in return, without preaching a sermon or handing out literature.” Pastor Jiwan Moon, founder of the FM-AM initiative, remarked, “This is true witnessing, not with our mere words but with our genuine actions of service for God and others.”

FM-AM is a youth-driven initiative that seeks to emphasize the importance of serving others and being known by our actions rather than our words or doctrines. Their mission statement is “Mentoring/discipling ordinary people in ordinary places for extra ordinary service and self-sacrifice.”

FM-AM have planned a second Follow Me “Silent Service” Flash Mob event on Sunday, September 16, 2012 from 12-12:45 pm at the CN Tower. For more information about FM-AM and how you can participate, check out their Facebook page, “FMAM – Follow Me Adventist Movement”. You can also follow them on Twitter at FollowMeSDAM or visit their website at followmeadventist.org

Check out FM-AM’s silent flash mob cleanup in Toronto on YouTube at http://www.youtube.com/watch?v=ghWA1Z1oyAI