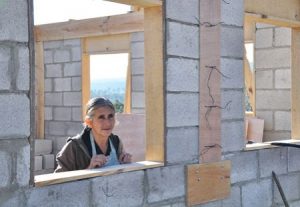 While visiting family in Guatemala in 2007, Mishell and her then fiancée Marvin met Gregoria Martínez Reyes, known as Goya, and her family of 17. The large family was living together in two little wooden shacks, one 10 feet by 10 feet, the other 10 by 15 feet, built from scraps of lumber that loggers had left behind on the hillside. Their only defense against cold temperatures that sometimes drop to -3°C were colourful plastic Christmas wrapping that plastered the walls.

Ever since they visited theMartínez-Reyes family, Marvin and Mishell dreamed of one day returning to build them a proper home. Married and back in Kelowna B.C., Marvin and Mishell shared their idea of helping this family with Pastor Brian Hawes of the Rutland Seventh-day Adventist Church. Pastor Brian said, “Sure, let’s do it.” The organizing began. Marvin spent a few weekends drawing up plans for a concrete block house of 1,200 square feet that would meet the family’s needs.

On Jan. 17, 2012, the Canadian missionaries arrived in Guatemala City, ready to start construction on the Martínez-Reyes family’s new home. Little did they know that they were an answer to a long and fervent prayer.

Read more on this story in the May 2012 issue of the Canadian Adventist Messenger.