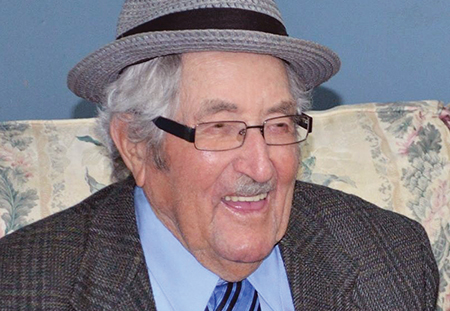 September 7, 2013, started out like any other sunny Sabbath morning. Richard Stagg had his driver’s license renewed the week before, and he was happy to drive himself and his wife, Dorothy, to the Bay Roberts Seventh-day Adventist Church, just as he had done many times before.

But this wasn’t just another day. This was Mr. Stagg’s birthday, his 100th birthday, and the church was packed. Every pew and folding chair was occupied. There was standing room only as friends, family and community members came together to celebrate this momentous occasion.

The celebration began with prayer by the local Pentecostal minister, Pastor White, and continued with the Grace Gospel Singers from the United Church, who not only sang for him, but two of the members, Bill and Florence Littlejohn, actually wrote a special song for the occasion:

A thousand years to the Lord is as a day when it is past, as a watch in the night we are told
and days of our years are threescore years and ten; any longer is a blessing to behold.

Mr. Stagg’s son Ron gave us a glimpse into his father’s life. Mr. Stagg was born in Cape Freels, Nfld. In the early 1940s, he married Inez Elizabeth Stokes, and together they had four sons: Ronald, Wesley, Cluney and Eugene. The family moved to Bay Roberts in January 1959 so that the children could attend an Adventist school. On April 18, 1959, Richard was baptized and became a charter member of the Bay Roberts Seventh-day Adventist Church. On Thanksgiving Day of 1980, Richard’s dear wife, Inez, passed away, and at 67 years of age, he was left to carry on alone. Thirteen years later, at 80 years of age, he married Dorothy Drodge.

As amazing as all of this was, the highlight of the celebration, for me, was when Mr. Stagg, his wife, Dorothy, and his daughter-in-law, Rowena, stood side by side on the platform and sang together “In Times Like These.” I don’t know if there was a dry eye in the church as his strong, steady, sincere, 100-year-old voice sang out above the others, “I’m very sure, I’m very sure, my anchor holds and grips the solid rock.” I could picture the angels pressing forward to catch every word.

When asked about his secret to living to be 100, Mr. Stagg’s answer was “being outdoors, spending time in the garden.” His wife, Dorothy, continued, “I can’t believe he’s 100. He has so much energy; I’ve never seen him tired.” That amazing energy, along with his incredible memory, was witnessed by all at his birthday celebration as he spent the day singing, laughing, eating, reminiscing and greeting hundreds of well-wishers, calling most by name.

At campmeeting, just six weeks before his 100th birthday, Mr. Stagg  offered the opening prayer for the Sabbath worship service. He prefaced it by saying, “I am very happy to be here today as a living witness to the saving and keeping  power of Jesus Christ, my loving Saviour who came down from heaven to ransom me, a sinner.” And what a witness you are, Mr. Stagg, to your family, your friends, and your community. One hundred years of faithful service. No wonder you are so greatly loved.

Whether you call him Richard, Pop, Uncle Richard or Mr. Stagg, one thing’s for sure: once you meet this God-fearing, hardworking, fun-loving man, you’ll never forget you met him. Oh, and by the way, he’s not likely to forget you either.