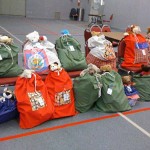 Jacqueline Clarke had been watching 3ABN and discovered a new community services project called “It’s My Very Own: Bags of Love.” Bags of Love is a project that supplies the immediate necessities to displaced children, specifically children removed from the home because their parents were cooking methamphetamines in the house. Meth is terribly addictive, and because the drug penetrates everything in the home, children who are removed from these homes are unable to take anything with them. No clothes. No toys. No family photos. Nothing. The raids generally take place in the middle of the night because that is when the police can be reasonably certain of finding the perpetrators at home. So, the children suffer shock and trauma and are taken from the only home they have ever known. They need physical evidence that someone cares.

Jacqueline was inspired by the witness of the woman who started the project, Barbara Neher, and was strongly impressed by the Holy Spirit that this could be of benefit to the children of the City of Calgary. Jacqueline is part of the Women’s Ministries team at Calgary Central SDA Church, and she brought the concept up at a meeting.

The ladies thought it was an idea that could work. The Central church family has a big, generous, corporate heart, and this was a project that they could take ownership of and support, so the ladies put their heads together and got organized. It was necessary to put a face to the project, but who would be the brave soul to stand up front and ask for the congregation’s support?

“Weeellllll, I’ll go up front if Jacqueline will come with me, seeing as how it was her idea,” Lillian hesitantly suggested.

Jacqueline agreed, and the next Sabbath, the ladies put together a Bag of Love to show to the congregation and give them a better idea of what was involved and the size of the project. Pastor Randy Barber grinned at them with their big bag, which had a large teddy bear’s head peeking out, and said, “You’ll do great. You’ll do great!” With his encouragement ringing in their ears, they stepped out onto the platform and spoke from their hearts, describing the project and referring the members to the “Wish List” in the bulletin.

And the supplies started coming in. There were teddy bears and crayons, and a local dentist and his wife donated toothbrushes and toothpaste. Toys and books were dropped off at the church. Soon, there were enough supplies to put together eight Bags of Love. The ladies drove to social services and dropped them off.

“Thank you so much!” was the response from the social workers.

With time, the project has grown, and now anywhere from eight to 16 Bags of Love are dropped off at social services each month. Social services now has a special room reserved for the Bags of Love, which are sorted according to age group, and as the children are brought in, they are given the choice of which bag to take. One very little guy, we are told, grabbed a hold of the bag  that had the biggest teddy bear. The social worker laughed as she described how the bag was bigger than he was, but when asked if he needed some help to carry it, his response was a firm, “Nope!!!”

There have been some low points, for instance when the ladies wondered where they would get enough quilts for the next month, but the Lord has provided just enough at each step of the way, and sometimes from unexpected sources! Just one example would be the 15 quilts donated by a lady in Saskatchewan who had taken up the hobby just to keep busy and was wondering what to do with all these quilts she had made!

As we step out in faith, our Heavenly Father provides what we need when we need it. With His leading, we really can make a difference in these children’s lives.