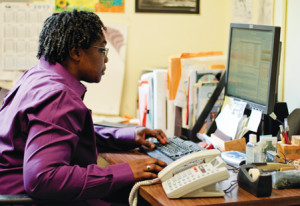 On April 28, 2013, one brave inmate at the Nanaimo Correctional Centre took his stand to be a witness for Jesus by being baptized. Twenty inmates gathered around to observe something most had never seen before.

This wonderful event was facilitated by Chaplain Karen Hayde. Four months ago the young man asked Hayde what baptism was all about and said that God had impressed baptism on his mind over and over again; in fact, he said, “God won’t leave me alone!” Over the next four months Hayde carefully studied the Bible with this young man, teaching him the truth about a wonderful God who longs to save him. A date was set. Pastor Karen continued to work and pray for God’s angels to protect this brave inmate and for the Holy Spirit to fill his heart with love.

In March, I received an email inviting me to come to witness this wonderful event. Chaplaincy has been a passion of mine for the 23 years of my ministry, and to hear of a baptism in prison made my heart throb. The Seventh-day Adventist Church in Canada had requested me to work with a team to develop a manual for chaplaincy in Canada. This initiative, still under way, is to encourage young men and women to consider chaplaincy as a ministry career.

Although Canada is taking its first steps to formalize chaplaincy within pastoral ministry, chaplaincy began in the Adventist Church first at Battle Creek College (ca. 1875), then Battle Creek Sanitarium and other Adventist health care facilities. The Second World War prompted a few Adventist ministers to venture into the military services as chaplains. In the United States nearly 100 Adventist clergy now serve as military chaplains, providing pastoral care for Seventh-day Adventists in military services. In Canada the number of Adventist clergy serving in the Canadian Armed Forces is less than a handful, but interest in serving in that field of ministry is growing.

Preparation for me to attend this service included filling out various identification forms and police checks—a lot of paper work for a few hours of ministry and celebration! When my wife and I arrived at Nanaimo Correction Centre (NCC), we submitted our identification at the front gate and waited for Chaplain Karen to escort us to the chapel. The chapel is a sacred space in prison, a place where inmates can come to receive spiritual guidance and support. For the inmates, the chapel, and chaplain’s office, is a place where they can share with the chaplain their fears, struggles, and hopes. The chapel at NCC is about 800 square feet with rows of chairs in front of a wooden pulpit, and above it hangs a handcrafted cross—both made by past inmates. A piano in the corner and a guitar on its stand testified of music being part of worship. When we arrived in the chapel, we were met by eight volunteers, who quickly gathered in a circle to pray that God would fill this sacred place with heavenly beings.

Moments later, the first group of 20 or so men arrived. Each inmate was met by a volunteer and welcomed to the service. Karen took her guitar and led out in singing praises to God. Afterward one of the volunteers introduced and led prayer time. Listening to the heartfelt prayers of the inmates was a blessing to me. They prayed for one another, for their families and also for themselves.

Karen provided an experience in worship. She illustrated her message by sharing the story of Baalam and how God used a rebellious prophet to bless His people. The story came alive in a modern setting that held the attention of everyone. One inmate had his Bible open and was following along with the story and several times bust out with “That’s it; that’s what it says!” Chaplain Karen Hayde assured each inmate that “despite sins committed to you or by you, God has a plan for you to live life more abundantly — to the fullest full.” She challenged each inmate to live in Him, by Him, through Him and for Him. Worship service closed with the singing of “Amazing Grace”— the “jailhouse version,” as the inmates called it.

You can read more about Karen Hayde in the July 2013 issue of the Messenger.