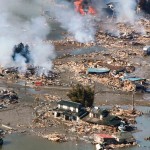 “I feel so happy because I am alive and I have a house to live in. There are so many people in harsher conditions. ADRA providing food, twice, even once a day, makes us feel so grateful and happy,” said a woman recovering at ADRA’s soup kitchen in Sendai, one of the earthquake-affected areas in Japan.

The Tohoku earthquake struck in the early afternoon on Friday, March 11, 2011. The devastating 9.0-magnitude earthquake produced scenes of horror along the country’s northeast coast. “The quake caused a rift 15 miles below the sea floor” and, according to reports, brought Japan a full 13 feet closer to Canada![1] The quake (the fourth-largest recorded since 1900) was caused when the Pacific tectonic plate moved under the North American plate, causing Japan to sink downward by about two feet. “As Japan’s eastern coastline sunk, the tsunami’s waves rolled in.”[2] The destructive tsunami waves of up to 23 metres swept across eastern coastal regions and, in some cases, travelled up to 10 kilometres inland. Flames engulfed buildings after the quake. The tsunami also swept away numerous houses and left over 125,000 buildings damaged or destroyed. Many roads were damaged or destroyed.

As of the end of March, almost 30,000 people have been reported dead or missing. About a quarter of a million people have had to find refuge in evacuation centres, while thousands more struggle to remain in their homes without power, water or access to basic supplies. The capital city, Tokyo, was also affected. Throughout the region, gasoline and other fuels have been in short supply in the first days after the disaster.

Japanese Prime Minister Naoto Kan stated, “In the 65 years since the end of World War II, this is the toughest and most difficult crisis for Japan.”[3] With initial estimates placing the cost of the disaster at over $300 billion, this is the world’s most expensive natural disaster on record.[4]

The increasing pressure from the threat of a nuclear leak has hampered relief efforts. The government has created an exclusion zone, and if this has to be expanded, pressure on relief efforts will increase.

There are more than 20 Seventh-day Adventist churches in the region, and they have survived. A junior academy is located about 100 kilometres south of the nuclear plant; however, all the students had gone home before the tsunami. A fallen roof and cracked walls will need major repairs. The academy’s church is also damaged. 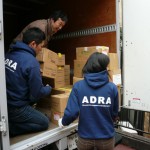 The Adventist Development and Relief Agency (ADRA) is often one of the first organizations to deliver relief work when disasters strike, including the deadly 2004 India Ocean tsunami, as well as earthquakes in Haiti and Chile last year. Even when ADRA is not amongst the very first responders, more importantly, it is engaged in relief efforts long after the news cameras have moved on.

Normally known as a donor or funding office in the ADRA network, ADRA Japan has a good relationship with the government. It is a member of Japan Platform (currently holding a membership of the board in this consortium), which has a high profile within Japan, composed of leading NGOs (non-government organizations) and government agencies. The government has invited ADRA Japan as the sole NGO representative on simulation activities with local authorities. Japan Platform has been appointed by the Ministry of Foreign Affairs as the coordinating body for all international NGOs operating in the country. (Not all international NGOs have a mandate to respond to local disasters, and therefore have not been included in disaster preparedness activities within Japan.) A member of the ADRA Japan staff joined the first Civic Force assessment by helicopter over the area. In the wake of the disaster, ADRA Japan’s relief team immediately began conducting needs assessments while carrying out initial relief activities. The local government has asked ADRA Japan to collaborate in the relief and in the evacuation camps, and Japan Platform has already approached ADRA Japan to assist with the expenditure of the millions of dollars raised.[5]

Emergency workers in Japan report that the government disaster response is proceeding well and that most areas in need of assistance are being reached. Japan’s sophisticated infrastructure has valiantly responded to the challenges. ADRA Japan is taking a sensitive and prudent response by coordinating its activities with the authorities.

ADRA Japan funds that were already available in-country covered the costs of the initial response. With the support of the Tokyo, Sendai and Fukushima Adventist churches, ADRA Japan staff members and volunteers have been assisting people in distress. ADRA Japan was given formal authorization to send personnel and vehicles into restricted zones. Supporters within Japan provided ADRA Japan with substantial funding immediately after the disaster, primarily through online giving and social media.

Examples of the immediate response activities include

Almost 10,000 people were given assistance in the first few days.

ADRA Japan started a soup kitchen and is assisting with food distribution in Sendai. One lady in her 50s, referred to at the start of this article, fainted due to anemia while waiting in line for her food. 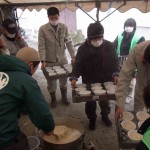 Fortunately, the anemia was not too serious, and after being attended to, ADRA Japan helped her to rest and she then proceeded to her home. She lives alone. Although her daughter is in a nearby town, because of the lack of access to gasoline, she is unable to visit her mother. Her home survived the earthquake and tsunami with little damage. Electricity and water have been supplied; however, since gas has stopped, she is able to take a bath only once every four days.

Since the shortage of gasoline is so serious, people are unable to travel far to buy food and necessary supplies. Even if they reach nearby shops, they can only buy a few items after waiting  several hours. With food stocks at home being exhausted, ADRA Japan’s food distribution is a precious lifeline.

Aid supplies are gradually arriving in the affected areas, but there are still some places that lack supplies due to the fuel shortage and transportation challenges. ADRA Japan will continue to assist each one of the affected people arriving at the ADRA evacuation centres and provide assistance where possible.

There has been a welcome financial response from ADRA donors and offices around the world. Supporters of ADRA Canada have sent in donations large and small, and  $100,000 have been raised (at the time of writing) for the ADRA Japan response. The size of this first phase of the network response is half a million dollars, so in effect, Canadian dollars are being matched 4:1 by the rest of the ADRA network! Depending on how the situation unfolds, ADRA Japan is looking at expanding the response to a second phase for another estimated $2.5 million.

“Network financial support is vital,” reports Chris Ishii, the ADRA Japan executive director. “But our ADRA staff and volunteers minister beyond finances. Some of the displaced people at one of our camps appeared very discouraged and depressed. ADRA volunteers got involved playing games with the displaced people, which resulted in a lot of laughter. This welcome activity did wonders for their morale!”

ADRA Japan, with the support from around the world, is endeavouring to

The scale of the damage following the earthquake and tsunami was significant, and resulting humanitarian needs remain considerable. However, Japan is a highly developed country and has, in principle, resources as well as the ability to respond to humanitarian needs. Japan has a consolidated disaster management system for disaster response, although the system, clearly, has been dramatically stretched. While many needs have been identified with everything from school textbooks and food to housing and psychological counselling, the priorities shift on a daily basis. ADRA Japan’s strategic and vigorous engagement with the various parties ensures that ADRA Japan acts in a most efficient and effective manner, practising good stewardship of the resources entrusted to them.

In such a post-disaster environment, there are many risks. ADRA Japan has carefully analyzed social, technological, economic, ecological and political risks, and has put strategies in place to manage and minimize these. It is noteworthy that ADRA Japan is taking a broad view of its involvement, considering the impact of its decisions and activities not only on the agency in Japan but also on the worldwide ADRA network and Seventh-day Adventist Church.

ADRA Japan continues to move forward cautiously but with clear intent. This approach will doubtlessly ensure long-term stability for ADRA Japan and a continuing good relationship between the authorities and the Seventh-day Adventist Church.