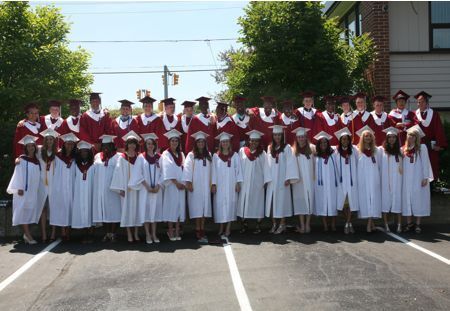 Kingsway College celebrated Grade 12 graduation during the weekend of June 17-19, 2011. Class Night, June 17, the graduates were introduced by photographs and a summary of their future plans. Mr. Ryan’s sermon titled ‘Step Out of the Crowd’ inspired them on Sabbath morning. Kingsway also celebrated 12 baptisms as a result of bible studies during the school year. Sabbath evening Mr. Greg Bussey gave the consecration address titled ‘Divine Design’ followed by a time where the graduates honoured their parents. The celebration weekend finale was commencement on Sunday morning with 38 students receiving diplomas. Of these, 7 graduated with honours (cumulative average of 80-84%) and 6 graduated with highest honours (cumulative average of 90% or over). Using science to illustrate, Mr. Peter Bayer challenged students during the commencement address to “Grin and Share It”. Another graduation highlight was the recognition shown to Mr. Jim Ryan who is retiring following 28 years of service as Dean of Men. CONGRATULATIONS to all the graduates and to Mr. Ryan for a job well done!
Contribution by:
Brandy Perkins, Administrative Assistant – SDACC Education Department
Picture taken by Pastor Milton Perkins
Current Issue