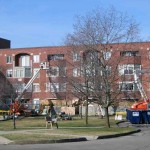 What does the list above represent? A mammoth prayer request or an impossible dream, you might say. The list actually represents the combined cost for two enormous projects, but the big price tag doesn’t adequately reflect the value of the service provided to the citizens of our community by our senior apartments, retirement home and nursing home. Church members from all over North America call the facilities at Heritage Green their home.

The need for these projects began in the spring of 2008 when a wetter than usual spring caused major water damage around the bay windows in our 110-unit senior apartment building. A closer examination of the problem areas revealed a very serious problem with the structure just beneath the windows, such as rusted metal studs and mould. Engineering consultants who were consulted agreed that the windows needed to be replaced, but it was felt that the more immediate problem was the roof. The estimated cost for that was $200,000—the total amount accumulated in the Replacement Reserve account. Having heard a few weeks earlier that funding was possibly available for major renovations of non-profit housing projects in the near future, our administrator, Rosemary Okimi made a call to our liaison in the municipal office inquiring whether Heritage Green would qualify. Imagine our surprise when we were told that the announcement regarding funding had just been released the previous day and that we should submit a proposal for the necessary funding. 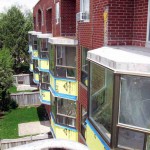 The assistant administrator, Scott Kozachenko, along with Rosemary set to work and quickly wrote proposals for the replacement of the roof, the windows and the walls below the bay windows. What a testimony to answered prayers when we were informed that our proposals were approved and that we would receive government funding. Work began very shortly after our approval was received, and within a few months the roof had been entirely replaced.

During an on-site visit from a city engineer to review progress on the roof project, it was suggested that there might be more funding available in the next few months through a program the federal government was sponsoring to stimulate the weakened economy. The very next day, we received a call from the city with the following statement:  “The good news is that there is a lot more money coming down, but the bad news is that you have exactly seven days to submit your proposals.”

Once again, the writing of proposals became the highest priority, and by the end of the week, a total of 17 additional proposals were submitted. Our prayers were answered once again in a very big way, as several more projects were approved for 2009-2010. In total, $2.2 million in grant money for renovation projects at our senior apartment building and retirement home was supplied. Several projects are currently under way, and plans for the remainder are in progress. We are truly grateful for the way the Lord has blessed us and pray each day that whatever is done here will glorify His name.

While all of this excitement was going on at the senior apartments, the Ministry of Health, after a very long delay, finally announced the Capital Renewal Program for Long-Term Care facilities, which will provide funding over a 25-year period to support a mortgage to renovate older facilities, bringing them up to the current design standards. This was something that we had been hoping and praying for over several years, waiting, sometimes not so patiently, for God to provide a way for us to renovate our 20-year-old facility so that we could change our three bedrooms to two bedrooms and thereby provide our residents with increased privacy and dignity. After much prayer and requests for the Lord’s guidance, a proposal to renovate 112 of our 167 beds (55 were added seven years ago and meet the new design standards) was submitted in July of 2009.

When the deadline for the announcement of successful proposals (November 2009) came and went without a word from the Ministry of Health, we prayed for grace to accept God’s timetable and for courage to continue to wait patiently. Hope sprang up again in early December when we heard that the Ministry of Health was behind in evaluating the proposals. As December passed into January 2010 without any news from the Ministry, we focussed our efforts on the approved projects at the senior apartment building and left the nursing home project in the Lord’s hands. Completely unexpectedly, as the Lord sometimes works, we received a letter followed by a phone call informing us that our proposal had been approved for Phase 1 of the Capital Renewal Project.

Currently, plans are progressing very well, with the architects fine-tuning the drawings and making sure that everything meets the new standards. Staff and families are excited as we look forward to being able to provide better accommodations and services to the residents and their families, and we are working through the details of arranging financing for the 25-year mortgage. 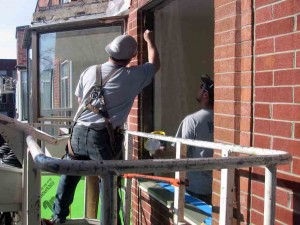 The final chapter of this story has yet to be written. As we continue getting all of our plans together for submission to the Ministry of Health for approval, one of our greatest challenges is to raise a minimum of one million dollars for this 10-million-dollar nursing home project. This is a daunting challenge by human standards, but when we consider what the same God who provided manna for the children of Israel in the middle of the desert has done for us in the past year, our faith is firm that what He has begun, He will complete. His ways are numerous and many times confound us as did our grant for the senior apartments.

We praise God for all that He has provided at Heritage Green Senior Apartments, Retirement Home and Nursing Home, our “Manna from Heaven,” and continue to trust Him to see all of these projects through to the finish. We ask you to continue to support us each day with your prayers. Thanks to all of you for joining us in this work for our seniors in Ontario.