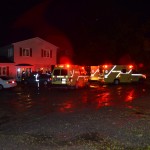 A Sunday-evening storm rocked the Quebec campmeeting in Lachute and injured nine people there just as the main meeting was coming to a close. SDACC vice president Dragan Stojanovic was conducting the meeting and reports his experience for the Messenger:

“Around 8:30, it started raining with strong winds near the end of my presentation.  It was very difficult for the participants to hear my voice with the noise of the rain falling on the tent. Just a few minutes after the meeting was over, when the majority of our members had already left the big tent, a great wind came and shook the tent violently. Everything started to move. I saw several pastors trying to hold down the metal beams of the tent, so I did the same, but a sudden gust of wind raised the tent along with the metal beams well above our heads. At that moment, the wind pushed the tent down and in the direction of the East. I am sure you can imagine that people were yelling, and they were trying to avoid getting hit by flying objects, especially the beams. I was successful in moving fast enough and avoided one beam. However, I could not escape the other big beam. But, I thank the Lord that I was only hit by the oval part of the beam and not the sharp part. (It was still painful, but it is getting better and better).

“Since there was a second smaller tent right beside the big one, everybody was afraid that this tent would also be blown over onto the people, but thank the Lord that did not happen. We had time to assist people who were caught under the first tent and to also help some children to get away safely.” 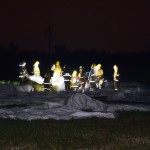 Quebec conference leadership reports that nine people were injured as a result of the storm on the campground. Six people were treated on site while the other three people were taken to the hospital. All have since been released.

Campmeeting in Quebec will continue in spite of the disruption of the storm. Meetings will be moved to a smaller tent while during the week, and camp staff hope to have another large tent erected by the weekend when many are expected to attend to hear General Conference president Ted Wilson deliver a message.