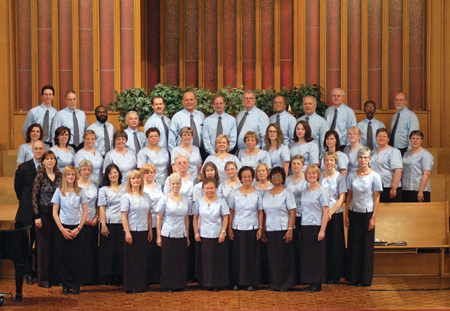 “Join the Durham Adventist Choir! It will be so much fun!”

“It doesn’t matter. Sharon Foreman is so good, she can teach us to sing!”

When I mentioned this conversation to our choir’s director, Sharon Janes Foreman, she cracked a smile and started laughing. Admittedly, this is a far cry from what most choir directors would want to hear of prospective members, but it was music to her ears. I asked her to explain why she is so gracious in extending membership to her choir. She replied, “If the goal is to be a community choir, and not a professional choir, then the choir needs to be built from the community.” After having taught voice lessons and choirs for 30 years, she firmly believes that if someone can carry a tune and match a pitch, that person can learn to sing in a choir. Other than Sharon and her accompanist husband, Greg Foreman, only a few of our members have any advanced musical training. Sharon doesn’t only conduct her singers; she educates them and gives them the opportunity to spread the gospel through song.

In January 1997, when asked by the members of the board to organize a choir at College Park Seventh-day Adventist Church, in Oshawa, Sharon replied that she was not really interested. The thought of weekly performances and a choir made from a finite supply of voices wasn’t the most appealing to her. She had a different vision, a vision of a united body of voices, voices from different churches, churches united in love: the love of singing praise to their Heavenly Father.

Sharon made her counteroffer. Would the College Park church board approve some funds for the start of community-based choir that did not belong to them? They did, and the Durham Adventist Choir was born, open to men and women from College Park, Kendalwood, New Life, and Bowmanville, and nearly 35 of us signed on. In 1998 the first choir members from other Christian faiths came to join us. Children of choir members came home from university and wanted in on the fun. Singers encouraged their friends and co-workers to join, and the numbers, as well as the music, swelled. Since then we have grown to a group of 67 members, who range in age from early teens to mid-70s. We come from all over Canada, the United States, South America, Great Britain, the West Indies, Europe, India, Africa, and Asia-Pacific. We come together because of our love of singing to, for, and about God and His gift of salvation. In spite of all of our differences, this unites.