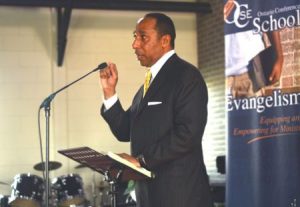 Thirteen-year-old Kendrick Ireland from the Kitchener-Waterloo Seventh-day Adventist Church is the youngest person to register for the Ontario Conference School of Evangelism (OCSE) as four new schools were launched in the space of just eight days (March 24–31, 2012).

Pastor Mansfield Edwards, Ontario Conference president, was the keynote speaker at the Kitchener-Waterloo and Ottawa Adventist Churches for the launch on the afternoon of March 24 and 31, respectively. He was joined by Pastors Halsey Peat, Theodore Sargeant and Eustace Williams, organizers of the OCSE.

Although intended as a time when registered and prospective students could meet their teachers, the launch of the new schools was also a time of worship and inspiration. At Kitchener-Waterloo, the praise team and band from Hamilton Mountain Church led out in vibrant worship.

“When we were led to begin a school of evangelism, we had no idea that it would grow so quickly,” says Pastor Williams. “Who would have thought, a year ago, that we would now be operating six schools across our province? But God always has a greater plan than ours. We are praying that many more of our church members will take advantage of this wonderful opportunity and be part of God’s plan.”

Read more on this story in the April 2012 issue of the Canadian Adventist Messenger.