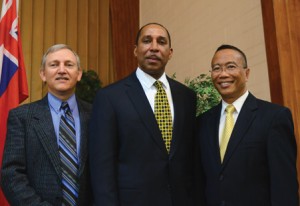 “I am deeply humbled by your confidence in me to serve God in this capacity for another four years,” Edwards told delegates. “It is a privilege to serve with you, and I look forward to working with you so that, together, we may participate in and witness the fulfilment of the Gospel Commission in Ontario.”

He expressed his gratitude to his fellow administrators, directors and office staff for their support but reserved a special “thank you” for his wife, Sharon, whom he introduced to the delegates as his “prayer partner”.

The significant contribution of Daniel Linrud would not be overlooked. To the approval of delegates, Edwards warmly thanked Dr. Linrud for his service and contribution. Delegates demonstrated their appreciation for Linrud’s service by standing and enthusiastically applauding him.

Ulysses Guarin was re-elected as treasurer for a fourth successive term. He too expressed his humility at being chosen as well as his appreciation for the confidence of the delegation.