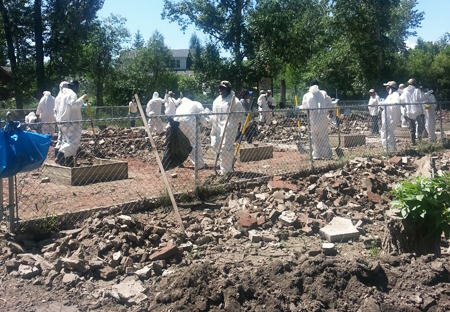 Operation High River has been a project initiated by the Alberta Conference and ADRA Canada.
It was several days before camp meeting when Larry Hall the ADRA Conference representative asked me to search for a chartered bus to take ADRA volunteers from Camp Meeting to High River. When I called around to bus companies, only one company returned my call in a timely manner.
Raquel from Prairie Bus Ltd emailed me back and confirmed a bus with driver for $900.00. I thought that she made mistake with this quote. However, I went ahead and told Larry. When I told Larry he asked, “Lyle are you sure its only $900.00, maybe its $900.00 a day?” When I contacted Raquel again, she assured me that $900.00 was correct and that she had asked her manager to give us a discount because we were assisting in the flood relief efforts in the community of High River. I thanked the Lord for his blessings and realized that when you serve others for the Lord the showers of blessings will come down.
I prayed to God that there would be enough interest and that every day this bus would be filled to serve. As I arrived at camp meeting a parent who explained to me that her son wanted to help with flood relief efforts so he took pictures of High River and Calgary made a calendar approached me. He sold the calendar for $2.00 a booklet, raised $107.00 and gave the proceeds to ADRA Disaster Relief. Another parent shared that his children set up lemonade stand in their community and also raised funds for flood relief. It was amazing to see how God was using children to confirm that he ordained this mission and that the members in Alberta were ready to help.
When Sunday morning came there were more than 55 volunteers who showed up who wanted to assist in High River. Some we had to turn away and others were so determined they drove their own cars to site. In Calgary there was a second bus that also departed to High River.
After we were briefed on our mission for that day we drove through High River to our site. From the bus windows we could see parts of the community that were ravaged by the storm. Homes were destroyed, car parts in yards, trees knocked down, businesses damaged because of debris. Many cars had been impacted by the water and were condemned to a large parking lot.
We entered George Lane Park and you could smell the water that had once ravaged the town. It looked like a ghost town. Where once kids pranced and played and parents picnicked, park benches were now turned over and covered in dirt. Where there was lush greenery all you could see is grey silt. Off into the distance you could see a once beautiful gazebo with a large stage area. Now in mud, debris, and silt covered this once beautiful structure. However, this depressing did not deter the spirits of the volunteers. Several ADRA volunteers armed with shovels, brooms, rakes, and buckets prepared for battle and away they went working on removing the debris and overturning the silt.
As they were working a van pulled up with local residents. They saw us cleaning and offered us bug spray, sack lunches, and much cool water. They also thanked us for assisting in the park.
At first we were a bit scattered all over the park, then a suggestion was made that we work together to clear small areas at a time. A group of volunteers started to clean a horse pit then a whole army of volunteers began to remove silt around the trees in that area. The sun was beating down on the backs and faces of the volunteers and with all the protective gear on they were becoming hot and tired. However, one man softly began singing “Onward Christian soldiers, marching as to war. With the love of Jesus going on before…” Soon the park was uplifted in song and the weary volunteers became rejuvenated with every song that rang out.
Finally, after three hours of hard labour, it was time to leave. As the volunteers were being rounded you could hear the call of some, “Just one more tree and then I will be at the bus.” and “I just need five more minutes please”. Despite the difficult work they determined to finish.
As we packed up to go home for the day, I stood around and surveyed the work that was completed. In three hours, the volunteers had cleared walkways that were not seen before. You could finally see the beautiful cream colour of the gazebo that was once glazed with dirt and debris. The horse pit that was once grey with silt now was covered with beautiful red dirt. Trees that once were struggling to live because of the silt that caked the dirt and its roots, now were cleared of debris and silt. The Red Cross was amazed at the patience of the volunteers and how much we were able to accomplish in such a short time. As a result, we were invited back to continue to clear more parks and playgrounds in the area.
When the bus set out that morning, we had idea what work lay ahead of us. There were volunteers who were as young as 13 and those who were senior citizens. However, for each one, the call to serve resonated so deeply that they were determined to serve no matter what. Many came back each day and others promised to go on their own to serve in Calgary and High River. An idea was brought forward that perhaps the Adventist’s could adopt George Lane Park? It was at that moment that I realized that Operation High River was not only to help change a community, but to open and change our hearts to the service of others.