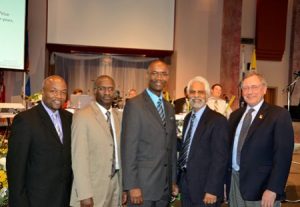 On Friday, September 14, 2012, delegates of the Quebec Conference streamed into LaSalle New Life Seventh-day Adventist Church, the site of the 8th quadrennial conference session. Pastor Alexander Bryant, executive secretary of the North American Division (NAD), Pastor Mark Johnson, president of the Seventh-day Adventist Church in Canada (SDACC), and Pastor Dragan Stojanovic, secretary / vice-president of administration of the SDACC, Elder John Ramsay, treasurer / vice-president of finance of the SDACC, and Dr. Mark Haynal, president of Canadian University College (CUC), were among some present at this year’s meeting.

There was an atmosphere of unity as people of different cultural and language groups came together to worship and praise God. The session commenced with a devotional message by Johnson, underlining the importance of trusting God in all circumstances, staying strong and unmovable and finishing the Christian course with joy. He concluded his message with a call to all participants to renew their commitment to God.

On Sabbath afternoon, the constituency assembled for the ordination ceremony of Pastor Juan-Carlos Atencio, joined by his wife, Wannetta, and their four children. After a powerful message by Bryant, charging him to preach the word in season and out of season, Atencio was ordained as a minister of the gospel in the Seventh-day Adventist Church. We wish Pastor Atencio and his family God’s continued blessings and the empowering presence of the Holy Spirit.

We were also blessed with Ramsay’s timely and appropriate devotional message on service and humility, before the organizing committee commenced their work on Sabbath evening.

The highlight of the weekend was on Sunday, September 16th, when the 15-member nominating committee working under the leadership of Johnson, elected the administrators of the Quebec Conference, and the new board of directors and executive committee (EXCO).

Finally, 21 members were elected to serve on the executive committee. Great care was taken to elect an EXCO that represents the diversity found within the Quebec Conference.

It is our prayer that God will richly bless the administrators, workers, and volunteers of the Quebec Conference, and grant us wisdom as we work together to reach Quebec for Christ!