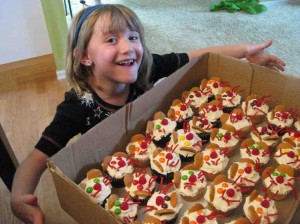 Kalista Ziakris, a seven-year-old grade two student at College Heights Christian School in Lacombe, AB., recently raised $600 to buy 60 canes for the children at the Kabul Blind School in Afghanistan. She did this by baking and selling cupcakes and stuffed animals.

Her mother, who is a supporter of A Better World (ABW), says, “She asked Eric [Rajah, ABW director] for project ideas and when he told her that canes for the blind in Afghanistan were a need, she was excited.”  She used her allowance to buy the ingredients.  The Lacombe Co-Op manager donated containers for the cupcakes. Kalista then made the cupcakes and sold them at her school garage sale. She even donated her own stuffed animals to be sold.

Raising money to help make a better world is not new to Kalista. Last year she organized a project to buy shoes for children in Kenya for Christmas. This time, her enthusiasm caught on and Mom, Auntie, and Grandma joined her in her efforts to make and ice the cupcakes.

Kalista’s efforts have not only inspired those closest to her. Now, others are doing their part to bring much needed supplies to the Kabul Blind School. Along with Kalista’s 60 canes, 100 slates (Braille notebooks), 200 stylus, 85 more canes, and five boxes of Braille thermoform paper also will be shipped to the blind school. Azalea Lehndorff, of Freedom Run 5000, is collaborating with the Canadian Embassy and the Canadian Military Police in Kabul to arrange the shipment of these goods.

When asked what she would like to say to other kids her own age, Kalista says, “I would say to ask Eric about a project and then figure out a way to get money for that project. They could also give something of their own.”