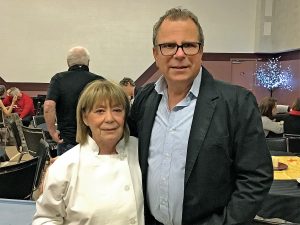 Seventy-seven-year-old Helen Croden is a going concern when it comes to helping people. She has a wealth of over 40 years’ experience using her gifts—cooking, catering, and organizational skills—mostly on a volunteer basis. Her unpaid humanitarian portfolio includes having been a sous-chef for the Salvation Army in both Rutland and Sutherland, B.C., as well as for Inn From the Cold, the YMCA kids’ camp in Rutland, and the Uptown Rutland Business Association Scarecrow Festival. Before all of this, she had her own catering business in Edmonton, Alta.

When most people would have hung up the apron long ago and donned their slippers instead, Croden is still full of energy at nearly 80 years of age. Though she is a member of the Salvation Army church, she and her husband had just finished attending an It Is Written series by Chris Holland in Kelowna, and they attended the Rutland Seventh-day Adventist Church. They were in attendance that day when Cam Koronko, pastor of the Rutland church, gave her, along with 23 others, a crisp $100 bill to further God’s kingdom. Koronko left it up to them to decide how to invest that money. It was called the Kingdom Project, and she took it on with the zeal of a disciple. With her $100, Croden decided to help God’s little ones in the community through the Salvation Army’s Christmas Appeal. Hence, the idea of a Spaghetti Dinner Fundraiser was born.

Croden went to such lengths as writing letters explaining her mission and personally delivered them to various grocery store chains, then followed up later. She went to Global Okanagan, Castanet, and a city councillor for help to advertise the event. The event was held on Oct. 28 at the Salvation Army facility on Sutherland Avenue. Kim Burry, the captain, graciously donated the use of their hall, kitchen, and decorations and assisted with the meal serving, along with volunteers from the Salvation Army and the Rutland church.

Croden approached Kris Newson, the general manager of The Old Spaghetti Factory, for his advice on cooking noodles. He not only offered advice but also volunteered to cook the noodles and assist with serving the meal. He brought along sous-chef Michael and server Sherry Anne, who also volunteered their time and expertise. Kris (Croden’s angel in disguise) was great at training the other volunteers participating at the event as well.

A nail-biting experience, the event didn’t come together until the proverbial eleventh hour. Advance ticket sales were meagre, but Croden put the problem in God’s hands—and 160 hungry people showed up. From the $100 investment, Croden, with the help of many other unsung heroes, made $1,000 in profit to benefit the disadvantaged families in our community through the Salvation Army’s program, thus advancing God’s kingdom.

“The smiles on the kids’ faces is my reward,” said Croden.