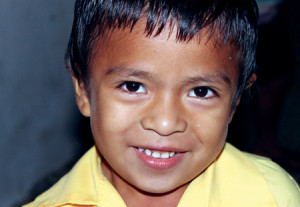 Forty-three percent of Belizeans live below the poverty line, but its southernmost region of Toledo is the poorest and least developed of the provinces. Many of the people there are Mayans, who continue to live in rural farming communities with weak infrastructure and little to no electricity. They grow enough to feed their families and find work elsewhere when they can. Unfortunately, there are few jobs, and many do not have the level of education required to find better-paying ones.

Most people succumb to the strong societal pressure to marry young and have many children. In addition, education is costly. Students receive government support until Grade 10, but in Grade 11 they must produce all additional funds themselves.

Visiting the Mayan village of Santa Cruz, we witnessed firsthand what these people sacrifice to go to school, and it shocked me. We stayed at the local Adventist high school, and there I got to know some of the students. On my first day, I met Louisa, who was so petite I assumed she must be my age or younger. When I asked her, though, she surprised me by saying she was 24. I couldn’t believe it. She told me she had not wanted to marry and had rejected several suitors, later realizing she wanted to finish high school so she could pursue a respectable career. She was attending the school on scholarship and hoped it would be enough to get her through university. Apparently, this isn’t unusual. Many young adults return to high school after several years; the school’s oldest student is 28 and in grade 11.

Another thing I learned is that the Mayan people are extremely dedicated. Louisa and several other students would go to school at four o’clock in the morning and not return until five o’clock or so in the evening. They lived about two hours from the school by foot, so they would often walk several kilometres and then spend the rest of the time waiting for buses.

It was the same way with church. Every evening at our evangelistic meetings, there was a woman with nine children who walked two hours to be there. She was always there before us and always closed up behind us before walking another two hours home in the dark.

Even the children inspired me. Each night there would be about 30 or 40 of them, and many came without parents. Most were Catholic or Nazarene, and there was one boy, Orlando, who faithfully attended our series as well as the church services with his three sisters. He was about 11, and I took particular note of him during Sabbath school because he was one of the few people who tried to sing the songs we taught the kids. He was such a wonderful participant, in fact, that he was selected to play the part of the man beaten by robbers on the road to Jericho, a part he played with great enthusiasm.

During the two weeks I was in Toledo, I learned more about the people and their way of life than I ever could have from statistics or Wikipedia. I heard their stories, and I saw them in action. And what I gained from the experience is more than I can express in words. The Mayans are open to God’s Word and want to hear more. The young people are eager for an opportunity to improve their lives, and many are already planning to return as teachers to their high school one day. If there’s anything I learned about the Mayans of Toledo, it’s this: they have infinite potential.