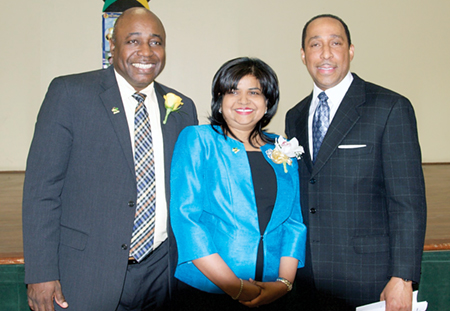 The newly appointed Jamaica’s High Commissioner to Canada, Her Excellency Janice Miller; and Jamaica’s Consul General to Toronto, Mr. Lloyd Wilks were hosted at a special ceremony by the Jamaican Canadian Association. Mansfield Edwards, president of the Ontario Conference, was invited to welcome them and offer a special prayer on their behalf, which preceded tributes and other ceremonial procedures.

Miller holds a Bachelor of Arts (First Class Honours) in history, French, and politics from the University of the

West Indies (UWI) at Mona, Jamaica,and a Master of Philosophy degree in international relations from the UWI, at St. Augustine. The High Commissioner-designate pursued the Foreign Service Program at Oxford University on a Chevening Scholarship and has received training in (a) public administration and policy analysis and (b) strategic planning, through the University of Peking, Beijing, and Carleton University, Ottawa, respectively.

Lloyd Wilks, who honoured an invitation to worship at the Apple Creek Seventh-day Adventist Church last year, has been appointed Jamaica’s new Consul General to Toronto. Wilks, with over 25 years of experience in the Jamaican Foreign Service, holds a Master of Science in international business from the South Bank University in London, a Master of Arts in diplomacy and international relations from the University of Westminster, London, as well as Bachelor of Science in geography and the social sciences from the UWI.