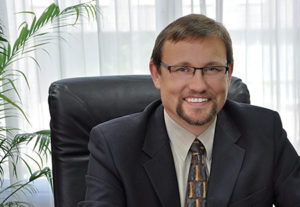 On February 6, 2017, the Burman University board of trustees voted Dr. Loren Agrey to serve as the institution’s 25th President. Agrey will succeed current President, Dr. Mark Haynal, who will be stepping down due to the expiration of his work permit.

“I am confident that Dr. Loren Agrey will be an effective leader for Burman University,” says Mark Johnson, President of the Seventh-day Adventist Church in Canada (SDACC) and Burman University Board Chair. “Loren is both a ‘people person’ and an excellent administrator.”

Dr. Loren Agrey is currently serving as the Dean for Undergraduate Academic Affairs at Kettering College in Ohio. He previously served as the President for the Asia-Pacific International University in Thailand. Agrey has served as an educator for over 35 years. From 2003 to 2010, he served in different capacities at Burman University: Contract Lecturer (2003), Associate in Academic Administration (2004-2005), and Vice President for Academic Administration (2005-2010).

“Throughout its 110-year history, Burman University has provided excellence in faith-based education,” says Dr. Loren Agrey. “I look forward to working with the administrative team, along with the faculty and staff, to continue this legacy of helping students achieve their academic, spiritual, and other life goals.”