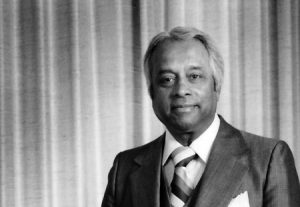 Lacombe – Dr. Neville O. Matthews, former CUC president, who tirelessly worked to achieve degree-granting status for Canadian University College died peacefully this past Saturday at the age of 93 in his retirement home in southern California. Dr. Matthews served as CUC’s 16th president from 1971-1982 when the school was still known as Canadian Union College.

Matthews began his education career at Spicer College, India where he taught classes and went on to become the principal of the high school division. After completing his Bachelor of Education and Master of Education degrees, he became academic dean and registrar of the college. Matthews, his wife, Sheila, and their family moved to Canada in 1956. Between 1956 and 1963, Matthews worked in several capacities at Canadian Union College: teacher, high school principal, academic dean, and registrar of the college division.

In 1964, Matthews was appointed dean of Medicine Hat Junior College, now Medicine Hat College, in southern Alberta and went on to become its president. In 1967 Matthews received his doctorate in educational administration from the University of Alberta.

In 1971, Matthews was invited to return as president of CUC. Using the same skills that had garnered strong growth in Medicine Hat—cultivating friendships with government and education officials and refusing to be daunted by a lengthy process—he worked to achieve degree-granting status for CUC.

In 1982 Matthews was asked to serve at the General Conference of Seventh-day Adventists as liaison between the Seventh-day Adventist church and the United Nations. In 1988 after the passing of his wife Sheila, Matthews returned to Spicer College where he served as president in his retirement.

He is survived by his children; Gwen, Jenny-Jeanne, Robyn and Ted.